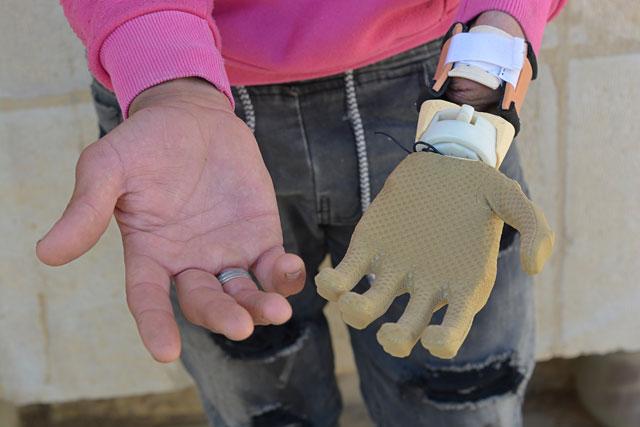 Muhammad Nasser Kennan shows the prosthetic hand supplied to him by Mand.ro, a Korean startup company with a humanitarian initiative (Photos by Mina Mohit)

AMMAN — Muhammad Nasser Kennan wanted to be a football coach after finishing school, but in the summer of his 10th grade, his dreams were put on hold.

Kennan was under the legal working age of 18 when he was hired as a temporary worker in a plastic factory in Zarqa and, within his first week of employment, the factory had an electric malfunction which led the machine he was assigned to clean to switch on, leaving his left arm stuck between rotating blades, causing amputation.

“I was rushed to the local government hospital and because I didn’t have any social security, my dad had to come and pay everything. The factory didn’t claim any responsibility for my injury,” said 21-year-old Kennan.

Kennan is one of the thousands living in Jordan with an amputated limb, some as a result of regional wars, others due to work or road accidents.

Three years after the accident, he was able to receive a customised 3D-printed prosthetic arm completely free of charge through the Korean startup Mand.ro in collaboration with the Korean International Cooperation Agency (KOICA) and SwissLimbs, a Lugano-based non-profit organisation specialised in physical rehabilitation.

“Muhammad was the first on our waiting list in Al Bashir Hospital and the first to receive this new technology. He has come a long way since: until recently, he wasn’t able to talk easily and suffered from major depression. We are happy to see him improve both physically and emotionally,” said Suzan Ibrawesh, the regional representative of SwissLimbs.

Since February 2017, Mand.ro has donated 40 prosthetic limbs to Syrian refugees and Jordanians with below-elbow amputation, according to the startup CEO Sangho Yi.

“We not only create the prosthetic arm specifically designed for the patient, but we also provide training on how to use it and conduct regular maintenance and software check-ups,” she told The Jordan Times at a press conference.

The startup representative said they aim to facilitate physical mobility for amputees without the huge costs usually associated with it.

“Prosthetic hands like the Bebionic, the iLimb, or the Michelangelo [internationally renowned models of prosthetic limbs] are selling between $25,000 and $100,00 and we are able to design and 3D print something similar costing us only $455,” Yi explained.

The CEO said that the 3D scanning and printing technology is not only preferred for its affordability but also because it is fast.

“Only using a laptop and a 3D-printer, we can have a fully functioning prosthetic hand in two to three hours,” said Yi.

Once patients are fitted with their new limbs, KOICA and SwissLimbs help in assisting unemployed patients back into the workforce. “99 per cent of our beneficiaries don’t have work,” Ibrawesh said.

Despite having a prosthetic and fully functional hand for the past six months, Kennan has not been successful in securing employment appropriate to his condition.

“I don’t want to work in a factory anymore, I hope no one sends their underage child to work in a factory. I wanted to work in a company, doing administrative tasks or anything, but nobody hired me. I hope things change once I get my Tawjihi,” said Kennan, who was forced to put his education on hold after his accident four years ago.